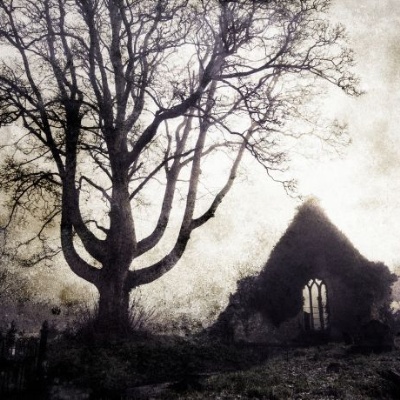 Last half term, Year 8 students studied the genre of Gothic Horror in English.  They completed a  piece of writing as an assessed piece under exam conditions.  Students were required to write a description suggested by an image, directly practising the skills required for their GCSE English examination.  Here is the response written by Isobel Ellson 8AMA, which really captures the atmosphere of the scene.

'The dark, brooding clouds engulfed everything on the hillside. The neglected muddy path was like an ugly scar on the beautiful countryside with green hills that stretched for miles. Unfortunately you could not admire any beauty without stumbling across something that was drab and gloomy.

The tall skeletal tree towered over what was left of the old mossy ruins. The tree’s scrawny branches pointed in direction off track, as if enticing you to leave the safety of the path and venture into the unknown hills beyond. The tree danced frantically in the howling wind, yet still seemed alluring and somewhat peaceful.

The ruins were covered in moss as if a giant carpet had fallen upon the old stone house. The ruins seemed isolated due to the contrast of beauty and destruction caused by wind, rain and time. Frost had started to cover the moss as winter approached. The wild moors became slippy and sludgy, yet the old ruins remained.

The sun tried to push its way through the crowd of dark clouds and eerie fog. But it kept hiding as if shy of the darkness; as if it was scared of what the darkness would do if the sun revealed itself…

So the darkness continued to shroud the abandoned path, the ruins and the tree. The darkness created a sense that the hillside was under constant supervision or under a quilt knitted from smog.

The dark, brooding clouds engulfed all the sunshine and happiness on the hillside.'